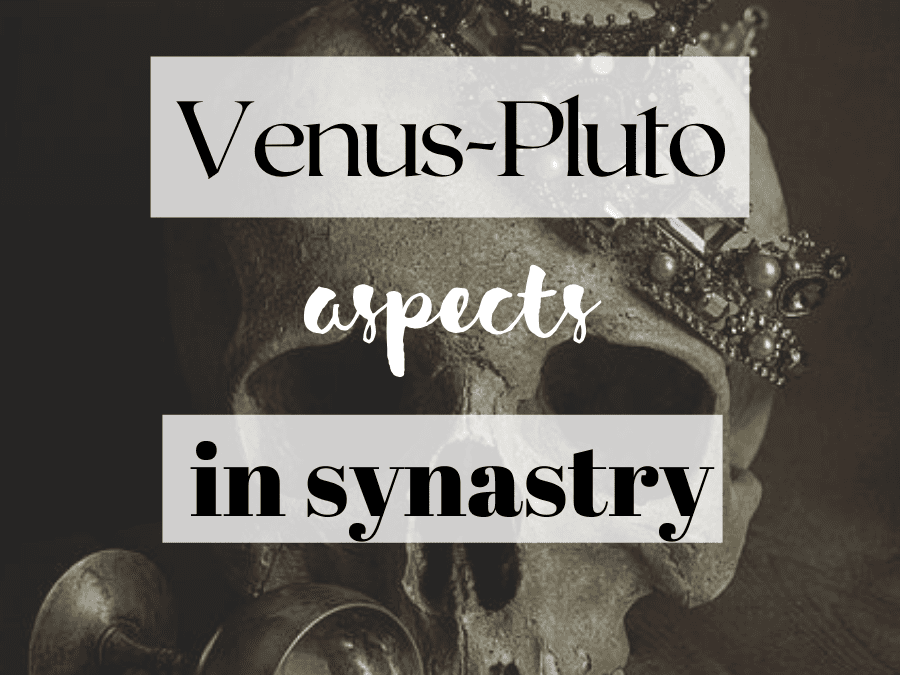 Venus-Pluto aspects are extremely iconic in the synastry chart. They are deeply transformative and can help to create a truly evolved relationship.

However, these aspects can also be painful. Pluto is all about transformation, but he will rip down old structures in a painful, life changing way. With Venus-Pluto aspects, love will quite literally hurt. All of your deepest feelings and love for others and self-love will be revealed through these relationships.

At their worst, these aspects can create love addictions and issues with power, control, and manipulation. At the best, you will emerge from your struggles in a spiritual, intense, intimate, evolved relationship.

In astrology, Pluto represents Hades, the god of the Underworld. While Venus is known to be the counterpart of Aphrodite, she more appropriately represents Persephone here, who Hades captures and steals away to the Underworld.

Hades wants a piece of Persephone’s beauty for himself, but he effectively traps her into staying because he is afraid she won’t choose to be with him.

These aspects are all about control versus freely given love. I recommend that you keep this myth in mind as you read the aspects below!

With the Pluto conjunct Venus synastry aspect, you may experience a lot of intensity in your relationship, especially at first. There’s a strong attraction and a magnetic pull that is physical, charming, and aesthetically alluring.

This partnership will definitely change how you see all other relationships. Both of you will find each other immensely fascinating but also disturbing in ways.

The Pluto conjunct Venus synastry aspect can start out great but create issues later with possession and even addiction to the other person. In particular, the Pluto person can start to feel controlling towards the Venus person. However, this can sometimes go to the other way, too.

Sometimes, the Pluto conjunct Venus synastry aspect can even indicate unrequited feelings. In the case that both people’s feelings are returned, you will find that there is a still an imbalance in the relationship, in some way.

There is a karmic tie with this aspect, but it can also become addictive if you can’t let go of each other. This can certainly be a love-hate relationship!

This relationship changes quickly. This can be for better or worse. In fact, if you’re able to work through the issues with Pluto conjunct Venus, then you can have a really evolved relationship. Pluto tears down and transforms, meaning your love life may change drastically for the better through this relationship.

However, the partnership can also evolve to be more focused on control, obsession, jealousy, or possession.

If you have the Pluto conjunct Venus synastry aspect with your partner, be careful of letting the relationship turn toxic and of unresolvable conflicts that leave a trauma mark on both of you.

It’s also important that the Venus person doesn’t try to hard to save the Pluto person. In fact, you both need to work on disconnecting in some ways so that you can discover who you are, then come together as a couple.

With the Pluto trine Venus synastry aspect, you experience a strong sexual attraction when you first meet. The energy is powerful and charged.

This is a great example of an “instant attraction” aspect. It’s unlikely that you will remain friends for long!

However, the Pluto trine Venus synastry aspect indicates a supportive emotional relationship, too. You both learn and grow from your partnership. After you climb each hurdle, you feel a sense of relief that you were able to learn something new with your partner.

Like with any Pluto aspect, you may still be consumed by each other. The relationship can feel very overpowering or compelling, as though you just can’t separate. This can be both sexually or emotionally.

However, the Pluto trine Venus synastry aspect tends to be easier. Even though you may go through many changes and hills and valleys in your relationship, it doesn’t feel as hard as other aspects might. These qualities come naturally to you, so it’s important that you take advantage of this transformational relationship to learn all you can about yourself and your reactions to love.

With the Pluto sextile Venus synastry aspect, you have an opportunity to grow and change through your relationship. It will take work to transform yourself and your relationship, so you can choose whether or not you take advantage of this aspect.

With a relationship that has the Pluto sextile Venus synastry aspect, you can push yourself to become enlightened about the concept of love. In this partnership, you will learn about control, jealousy, and possession, and you will come to realize that those things aren’t the highest form of love.

You are immediately attracted to your partner and feel a compelling, alluring energy when you first meet them. Sometimes, it can be hard to even know your own mind because you feel like you’re under the influence of this energy.

However, you need to be careful with the Pluto sextile Venus synastry aspect that you push to grow with your partner instead of falling back onto Pluto’s more negative attributes. If you’re the Venus person, then be aware of any control the Pluto person may enforce on you.

Ultimately, no matter which planet is in your chart, this is an opportunity to grow and learn how to set healthy boundaries in a loving relationship.

The Pluto opposition Venus synastry aspect is the true meeting of heaven and hell. This aspect can feel almost natural, because both planets are so opposite. It simply makes sense that they sit across from each other.

Usually, the Venus person feels intensely compelled by the Pluto person. They may have the urge to merge with their partner in any way possible.

With the Pluto opposition Venus synastry aspect, you may experience a lot of controlling tendencies or jealousy and obsession in the relationship. It may feel like you just can’t break free of this cycle, no matter what you do.

You may also find that both people play games with each other. Just when one of you has backed down, the other hits the throttle.

There is a very fine line between love and hate with the Pluto opposition Venus synastry aspect. Both people tend to play both roles at some point and will feel as though the other is trying to control or possess them, yet they do the same.

Ultimately, these issues in the Pluto opposition Venus relationship arise because each person has an intense fear of losing the other. They react to this insecurity by playing games or using manipulation tactics, yet this never truly works.

The Pluto person tends to have the upper hand because they’re more blunt or forceful, so the Venus person might be more passive-aggressive or manipulative to try and gain control, too.

The goal with this Pluto opposition Venus synastry aspect is to become more confident as individuals so that you don’t need to control the other person. Remember that trust can only be taken so far. You must also learn to let your partner just be without your influence.

With the Pluto square Venus synastry aspect, you’ll find that the relationship can quickly become toxic or obsessive if there’s nothing else to balance this aspect out.

Typically, the Pluto person is more obsessed with the Venus person. They just can’t stop thinking about them. However, this can go both ways, especially at first.

The Pluto square Venus synastry aspect shows how fine the line is between love and hate. You may feel unsure if the relationship is controlling or loving, but remember that it can’t be both at the same time. You struggle for love, yet you often find control instead.

There is usually a one-sided element to this relationship. One person may have the vague feeling of unrequited love; in some way, the energy is unbalanced.

You may experience power struggles and manipulation in this relationship. Sometimes, these struggles even explode into massive fights filled with anger and hatred.

Usually, the Pluto person is more afraid of losing the Venus person. Pluto will do whatever they can to keep Venus with them, whether this is through manipulation and control, or by giving up their core values to make the Venus person happen.

Remember that Pluto is much like the garbage man. The Pluto square Venus synastry aspect reveals the elements of love that no longer serve you and forces you to change them. The square doesn’t allow you to ignore these issues; you will find them in your face over and over should you try.

With a good deal of personal work, it is possible to transmute this aspect and discover what you truly want in love. At the end of it all, you can develop a relationship that is truly evolved, if both partners are willing to do this work.

Keep in mind that this is only one aspect in your chart. If you have positive aspects in your synastry chart to balance this square, then it may be less difficult.