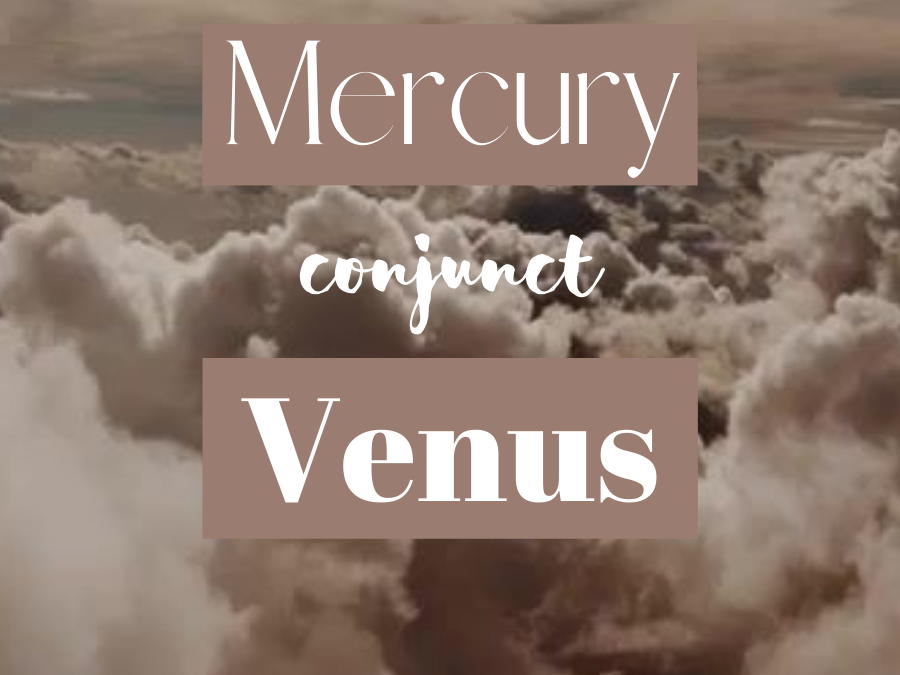 Mercury is all about the mind while Venus is all about beauty and pleasure. The Mercury conjunct Venus aspect quite literally means mental pleasure, so it’s an aspect that many people appreciate!

A conjunction means that two planets sit about 5 degrees or less (sometimes 8 degrees or less, depending on the type of software you use) from each other. The energy of the two planets works together so it can be very hard to separate them. Typically, a conjunction is the strongest aspect in the natal chart.

Mercury and Venus are both personal planets, so this conjunction will show up quite a bit in your everyday life. Mercury rules Gemini and Virgo; Venus rules Taurus and Libra. These signs are an interesting mix of air and earth elements together.

The Mercury conjunct Venus aspect will show up very differently if it’s in your natal chart than it will if this is a transiting aspect or an aspect in synastry.

For this reason, I’m breaking this blog post down into three sections: natal, transit, and in synastry. Feel free to scroll down to the section that applies to you!

If you have the Mercury conjunct Venus aspect in your natal chart, you are charming, poetic, refined, and polite. This is a true “Libran” aspect that makes you intellectual yet warm.

You might have an appreciation for the arts with this aspect. I find that many of these natives enjoy painting, writing, screenplays, music, or any other form of art. Sometimes, they do this as a career, while other times it’s a hobby or outlet for self-expression.

If you have this aspect in your chart, you are extremely diplomatic but you still appear warm. You really have the perfect temperament to appeal to others. This is a natural gift bestowed in your birth chart.

Oddly enough, you might come off as a bit delicate somehow. Even though Mercury conjunct Venus people are typically strong and are smart, cunning, and gregarious, they also have a delicate air that’s hard to explain. It endears people to you so it definitely isn’t a bad thing!

You are attracted (romantically) to people who use their minds; intelligence is extremely interesting to you. You need to connect mentally on some level.

You also tend to attract these intellectual types to you. If there are other positive aspects (such as trines and sextiles) to the Mercury conjunct Venus aspect, then this will be a positive thing, but if there are squares, you may tend to attract conniving partners or those who are “too smart for their own good.”

You probably value everyone’s opinions. You never think in black and white coloring; you’re willing to hear people out and give others the chance to speak or offer suggestions before you make a decision.

This placement means that you tend to intellectualize or rationalize your feelings. Even though you love all things beautiful, it can be hard for you to really process your emotions on a deeper level than simply intellectual processing.

You have a talent for diplomacy with Mercury conjunct Venus. You choose your words carefully, often because you know what the other person wants to hear, but this can make people feel that you’re not genuine. If you want to lie, you’re probably pretty good at it.

You may also be talented at writing, speaking, or other forms of communication, but this will depend mainly on the sign and the house the Mercury conjunct Venus aspect sits in.

To others, you seem like you have good judgment, whether or not this is true. It’s typically easy for people to trust you, at least at first, because you come off as graceful and fair.

You might be very creative and can sometimes use your ingenuity and intellectual graces to come up with new ways to earn money. Your tactfulness can help you exceed as a diplomat or political if you should choose that career path. These people are never rude and do extremely well around strangers!

Alternatively, these folks can be great salespeople. They also excel in any forward people-facing position, but sometimes Mercury conjunct Venus folks appreciate the arts and would rather stay home and create.

You’ll find that this conjunction doesn’t necessarily dictate your life’s career path, but it can shed some light on the qualities that can assist you in achieving your dreams.

In bed, you might especially enjoy verbal communication. You need to verbally know how your lover is feeling. Again, it can be hard for you to drop down into your feelings and let your mind go, so you need to find a way to bridge the gap.

As always, look at the sign and the house that the conjunction sits in. Mercury conjunct Venus in the 7th house will show up mainly in relationships, but this aspect in the 2nd house means that you can easily use this conjunct to acquire money and wealth.

When a Mercury conjunct Venus transit is going on, people are more logically creative. If this seems like an oxymoron, don’t worry: I’ll explain it all!

Mercury is the sign of intellect and of mental knowledge, but Venus rules love, creativity, and all things beautiful. When there’s a Mercury conjunct Venus transit going on, we will all feel more creative in a way that’s productive.

For example, you might be able to come up with a new ideal that is the exact solution you’ve been seeking. Your creativity helped you to come up with the idea, not your intellect, but it is your enhanced logic that will put it into effect.

The Mercury conjunct Venus transit is a great time to work hard if you have been stuck on something for a while! You can expect to get brilliant ideas that simply aren’t natural for you.

When the Mercury conjunct Venus transit is happening, it’s a great time for socializing. Everyone will be more outgoing and more tactful. I find that this is a wonderful transit for large group events!

It’s also a great time to negotiate any new deal or bargain. If you’re working on negotiating anything, wait until the Mercury conjunct Venus transit if possible. I know that you can’t always put off big matters until the astrology is right, but this is a really good transit for these types of deals.

On a personal level, the Mercury conjunct Venus transit is a great time to start new relationships. Friendships blossom when they begin under this transit because everyone is tactful, polite, and charming.

Romantic relationships also do well when begun under the Mercury conjunct Venus transit. First date conversations will be enjoyable, and the beauty of the other person will be enhanced to each individual’s date.

If you’re planning out your calendar for the Mercury conjunct Venus transit, you probably won’t want to be sitting at home alone on this day. This is a great opportunity to get out and socialize.

Whether you need to use this transit for business or for personal pleasure, almost everyone can gain something during the Mercury conjunct Venus transit!

I find that the Mercury conjunct Venus synastry aspect is usually positive. It helps partners communicate in a way that is pleasant and logical. These people will generally have a fun time together.

Often, the Mercury person in the Mercury conjunct Venus synastry aspect will do more of the talking, but this won’t create a power imbalance: it’s simply a personality difference.

If both people have good intentions, the Mercury conjunct Venus synastry aspect can be really beneficial! The couple is charmed by each other and generally enjoys each other’s company without trying too hard.

If either party has some sort of ulterior motive, then this aspect can be a bit dangerous. It’s easy to deceive and charm with the Mercury conjunct Venus synastry aspect; this aspect makes it hard for either partner to see what the other is truly thinking. This is especially true if the aspect is in Pisces.

Regardless of the sign, this aspect does make it easy for either partner to deceive the other. This may not cause a problem if neither partner has ulterior motives, but it can still hamper communication.

For example, this aspect makes it hard for the Venus partner to realize when the Mercury partner is hurt (or has hurt feelings) and vice-versa. Even though this couple has a lovely, happy time together, they will need to work on improving communication in order to get to the root of issues.

Alternatively, this aspect can make it difficult for the Venus person to tell the Mercury person what they really think about anything. The Venus person, depending on other aspects, may find themselves going along with everything because they don’t know how to say no.

I find that the Mercury conjunct Venus synastry aspect is usually great at first and gets more difficult as the relationship progresses and the couple requires deeper communication. Traditional communication practice (and sometimes therapy) can help clear this up if both people are willing.

Related: Juno Astrology: What You Need For a Relationship to Last