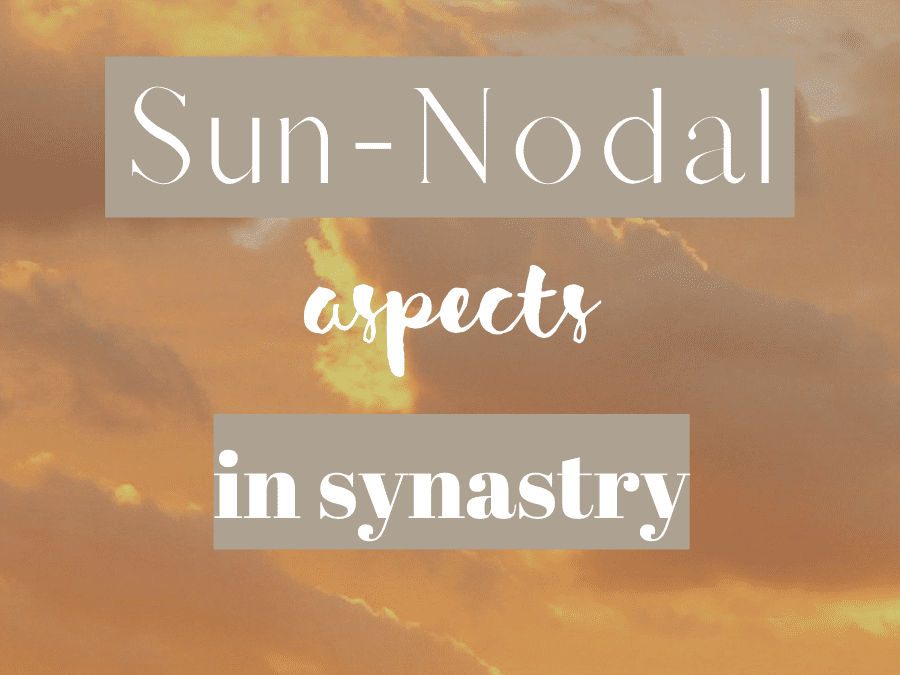 When one partner’s Sun aspects the other’s Nodes, it tends to shine a light on their soul’s purpose and illuminate both the past and the future.

The North Node represents what the soul is working towards, while the South Node shows the past self, or who one were in a past life. Because the Nodes are incredibly important in someone’s chart, another person’s Sun aspecting their partner’s nodes can have a very strong aspect.

These aspects are sometimes “soulmate” aspects because they indicate that you recognize each other from a past life.

Aspects to the South Node will feel comfortable immediately, but they can also hold you back from growing. North Node aspects to the Sun in synastry are more uncomfortable at first, but are ultimately more beneficial if you’re ready to change and evolve.

These aspects can make you feel like you’re meant to be with each other. However, you must be careful to keep your own identity separate and to remain an individual. Your path is always your own, but your partner can help you evolve and learn with these aspects.

If you have the Sun conjunct North Node synastry aspect, you will experience a relationship that is filled with growth and change. You both help to develop the talents and qualities of the other person, though this can be a bit much over time.

Your immediate attraction may be very powerful, whether this is a romantic or friendship aspect. Your bond transcends just typical romance.

The Sun conjunct North Node synastry aspect tends to be more uncomfortable or scary for the North Node person, while it feels natural to the Sun person.

However, this relationship is attractive to both people because it feels like it’s really “going somewhere.” If you’re in a Sun conjunct North Node synastry relationship, you may be quite active, always learning new things or trying new activities.

This will be especially apparent in the sign that the Sun conjunct North Node synastry aspect sits in. For example, water signs make you want to grow emotionally, while fire signs are more physically or mentally active.

Sometimes, this aspect can indicate that you’re new to each other in this lifetime, that your souls haven’t met in a past lifetime. Look to see if there are other aspects (mainly to the South Node) that indicate a past life connection.

However, even fi you do have a past life connection, this Sun conjunct North Node synastry aspect will feel like brand new energy. You haven’t encountered these qualities in your partner before, regardless of whether or not you met in the past.

This relationship will truly focus on developing each other’s strengths. Look to the house that the aspect is in to see exactly where in your life these qualities will develop.

The North Node person will feel that they’re out of their comfort zone from time to time. If they’re ready to grow and change then they’ll embrace this readily, otherwise they may try to shun the relationship at some point.

Nevertheless, both people are drawn towards each other by very powerful and attractive energy. This relationship simply feels right, even if it’s scary.

Although the Sun conjunct North Node synastry relationship is often quite beneficial, this isn’t always the case. Even when the Sun person hurts the Node Node individual, this can lead to change, so sometimes this aspect manifests in a toxic way.

The outcome will depend on how much growing the Sun person has done. If they’re egotistical, then they’re likely to teach unconsciously through pain, while an evolved Sun would be much better at showing the North Node person the light.

This aspect means that you have a clear connection in your relationship that feels important. Being together makes you feel like you’re really going places and moving forward.

Sometimes, you may feel that the relationship is destined or meant to be, especially when you first meet.

The Sun trine North Node synastry aspect indicates that you knew each other in a past life, whether your relationship was romantic, familial, or friendly. You are simply picking up where you left off.

When the Sun person is around the North Node individual, they feel like their best self. They’re naturally evolving and clearing out their past karma through this relationship.

Although the Sun trine North Node synastry aspect isn’t always perfect – what relationship is? – you probably feel a positive energy around each other because you sense that you’re working towards something important and evolving as individuals.

This means that you feel a strong immediate attraction because you know each other from a past life.

The Sun sextile North Node synastry aspect keeps you in the past a bit, but it gives you the opportunity, as a couple, to work through your past life karma and evolve.

It may take you a bit longer to clear out the karma. This is an aspect that gives you a choice. You can simply ignore it in your relationship, but it’s really beneficial to use this aspect by digging deep into your emotions, healing old wounds, and pushing each other to grow towards your North Nodes.

This aspect means that you know each other from a past life. You had a strong, deep relationship that may have been romantic, but could also have been a sibling or parent-child bond. You were very influential on each other in your past life.

Because of this knowing, you strike up an immediate friendship or feel that the other is quickly familiar.

The Sun conjunct South Node synastry aspect means that you’re picking up where you left off. At first, this is a really easy aspect and the relationship feels effortless.

Over time, the Sun person will feel safe and secure to their partner, but will also pull them back into the past life. The North Node may find that they avoid their issues and working towards growth when they’re around the Sun person because it’s easier to stay comfortable.

The Nodal person can start to feel suffocated if they want to grow, or they may start to sense that something about the relationship is simply wrong. At first, safety and security feel great, but the Nodal person will realize – even unconsciously – that they can’t grow without a bit of instability.

If the Nodal person does try to grow, their North Node qualities might trigger the Sun person. Our Earth Signs sit exactly opposite our Sun Signs (check out more about the Earth Sign here if you’ve never learned about this), and the Sun person is actively trying to get away from their Earth.

Unfortunately, each person is trying to grow in the exact opposite way, so when one person tries to expand and learn, it triggers their partner.

It’s important that both partners leave space for the other to grow. They won’t necessarily need to grow together, but they can help each other find the best qualities in their past.

Even the South Node and the Earth Sign have qualities that can be used for good. The problem is that each person embodied the most uncomfortable, or worst, qualities of these signs.

The Sun conjunct South Node synastry relationship can help you delve into your past and rewrite it, instead of simply ignoring it. However, this takes a lot of work from both people; each partner must be willing to contribute and face their darkest parts.

If you have the Sun square North Node synastry aspect, then the first partner’s Sun will also square the other’s South Node.

With this aspect, you feel as though you’ve known each other before. There is a strong pull when you first meet because you unconsciously remember your past life relationship.

Usually, the Sun square North Node synastry aspect indicates an unhealed wound from a past relationship. This square isn’t necessarily bad. In fact, it gives you an opportunity to heal this relationship.

Squares create friction which stimulates growth. By pushing against the Sun square North Node synastry aspect, you will run into issue after issue, but you will also heal a the trauma between the two of you.

You had a very deeply personal relationship that was broken or fragmented. Now, you still feel remnants of this energy and you must learn how to heal the wound and trust each other again.

Although the Sun square North Node synastry aspect isn’t easy, if both people are willing to do the work, you can evolve and grow quite a bit through the relationship.