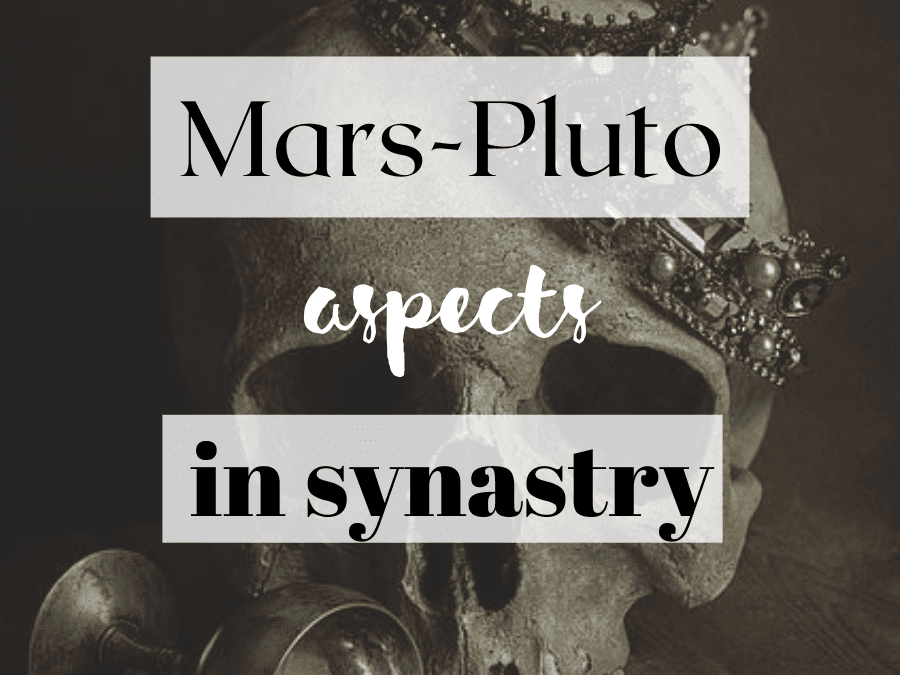 In the synastry chart, Pluto-Mars aspects are all about competitiveness, drama, conflict, and sexual attraction.

Like any other Pluto aspects, these aspects are extremely charged. They tend to be more animalistic and physical in nature.

Sex can be transformative in these relationships, whether it transforms the people, or the couple transforms their own sex life. However, it can also be an aggressive element of the partnership.

There is a jealous or possessive tendency to the relationship for both positive and negative Mars-Pluto aspects.

With the Pluto conjunct Mars synastry aspect, the couple experiences an intense sexual attraction. However, sex can also be a form of manipulation.

Both people thrive on power struggles and are constantly trying to get the upper hand. They may also manipulate each other.

In the Pluto conjunct Mars synastry relationship, there may be a need to control each other’s actions. Typically, Pluto tries to control Mars while Mars tries to break free, but this dynamic will sometimes flip, too.

Both partners may feel that they’re always facing their deepest desires as well as their most painful hurts.

The Mars person might feel as though they’re being invaded by the Pluto person. They might intuit that their actions aren’t their own because Pluto always wants to merge deeper.

The Pluto person might struggle to control or tame Mars. The Pluto individual probably goes through life controlling others, but this doesn’t work as well with the Mars person.

At its best, the Pluto conjunct Mars synastry aspect can lead both people to be 100% themselves with each other. They may recognize qualities in each other that no one else has.

However, this couple can also struggle with control and manipulation. They may feel as though they’re always on edge and are constantly in danger of falling into the other person.

With the Pluto trine Mars synastry aspect, there is a natural, animalistic attraction. The couple feels empowered in the relationship and they’re drive to stay together.

However, there can still be some battles with this Pluto trine Mars synastry aspect. Mars wants things to happen quickly, while Pluto wants to feel things more deeply. Because of this, the nature of the relationship may be hot and cold.

The Pluto person is often a driving force behind the Mar’s person’s actions. Being around the Pluto person makes the Mars person get out there and act.

The Pluto individual will “jolt” the Mars person into action, but this is typically beneficial for the Mars person. With the trine, this comes quite naturally.

However, the Pluto person might try to control Mars’ actions if they feel that it’s necessary.

Regardless, there is a palpable intensity between the partners with the Pluto trine Mars synastry aspect. Sometimes, this can turn into jealous or possessiveness.

This may feel like the most intense relationship that both partners have experienced. It’s physically and emotionally profound.

With the Pluto sextile Mars synastry aspect, the relationship has the potential to be consuming and intense, but these are qualities that will grow over time.

The sexual aspect of the partnership will be deep, transformative, and maybe even regenerative.

This Pluto sextile Mars synastry aspect gives an opportunity for the Pluto person to push the Mars partner into action. This is usually beneficial for the Mars individual as they feel inspired by their Plutonian partner.

This passion is most likely present in the Pluto sextile Mars synastry relationship, but it might not be obvious to other people. The intensity is usually expressed between the two people in their most intimate moments.

Although both people may react differently with the Pluto sextile Mars synastry aspect, they can each learn a lot from each other and develop a fulfilling relationship, both emotionally and physically.

The Pluto opposition Mars synastry aspect indicates that the relationship will be full of power struggles. Neither partner will allow themselves to be controlled, but they may push each other to anger or even physical combativeness.

Over time, the Pluto person might feel that the Mars person is too sexually aggressive or too physical. They probably want more emotional depth on some level.

The Mars person may feel that the Pluto person wants to probe too deep or is too emotional.

The Pluto opposition Mars synastry aspect definitely creates an opposites attract type of scenario! There is a lot of sexual attraction between this couple, but that can be tinged by their struggles for control.

Each person simply cannot understand each other, though they probably want to, on some level. This can also be felt sexually, as they have largely different sexual styles, but truly want to come together.

Usually, a masculine versus feminine energy will emerge, regardless of the actual genders involved in the relationship. Each person may take on a role, especially during fights or sexual encounters.

When the couple is in an argument, the Pluto person will probe the Mars person into action. When the Mars person does react, they can feel upset about their own actions because it feels unlike them. This is because the other person’s Pluto is directly triggering their Mars.

Over time, the Mars person may feel a loss of power, so they may turn passive-aggressive towards the Pluto person in order to take back control. This is when things can turn aggressive with the Pluto opposition Mars synastry aspect.

At best, the couple will release this competitive energy through sex. Outside of the bedroom, they must learn to understand each other without anger or explosive fights. Communication may be almost non-existent in this relationship at first, but it is essential that this couple develops those skills.

The Pluto square Mars synastry aspect indicates an intense sexual attraction, but it also means that there will be a a struggle for power in the relationship.

Neither person wants to be controlled, yet they both try to overpower their partner.

Initially, the Pluto person is attracted to the Mars person’s strength, but Mars wants to learn more about Pluto’s emotional depth. Although the couple is really attracted to each other (as squares create intense energy), they also feel suspicious of each other’s motives.

Mars acts with more instinct while Pluto tends to plan things out. Mars may have more physical issues related to their own actions, while Pluto has more emotional issues.

Typically with the Pluto square Mars synastry aspect, Mars will be more sexual. They have a constant need to be touching the Pluto person, no matter what is actually happening in the relationship.

Sex is the easiest way for the couple to express their constant tension. This Pluto square Mars relationship may be based on hate sex.

Over time, Mars may come to feel a loss of power because Pluto is emotionally intense. They may become passive-aggressive or make fun of Pluto in ways that really hurt.

Ultimately, this couple needs to learn how to be less competitive and more caring towards each other, or the relationship can quickly turn into hate and rage.