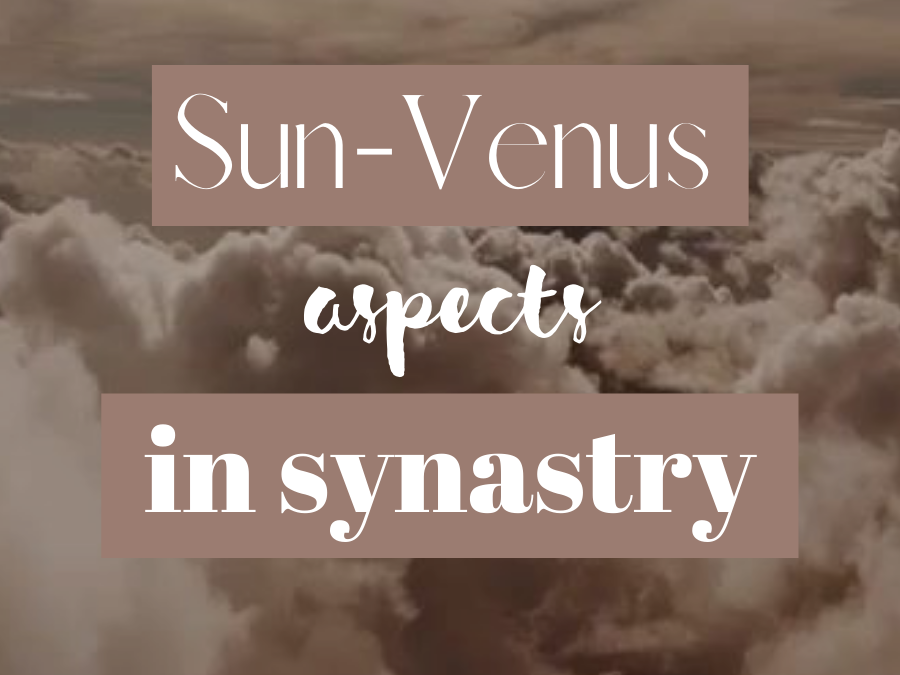 Venus-Sun aspects in synastry are super popular for a reason: they’re generally indicative of attraction, love, and long-term relationships.

If you have a beneficial Venus-Sun conjunction with your partner, you truly admire each other. You agree on values, likes, hobbies, and everything else that makes life fun!

Keep in mind when looking at aspects that they can either be helpful/positive or difficult. There is a whole range of aspects.

Positive aspects are fun and easy because the energy just flows naturally, but they don’t inspire much change. Difficult aspects are actually what force us to grow through conflict.

Any difficult aspect can be worked through and dealt with if both partners are willing. This is actually when we learn the most. Astrology just gives us the guidelines, but we still have free will and can make our own choices!

With the Sun conjunct Venus synastry aspect, both partners truly admire each other. The relationship can feel kind of romantic or grand; they are attracted to each other’s core values and characteristics.

This Sun conjunct Venus synastry aspect isn’t necessarily super sexual. Instead, these partners just truly admire each others’ values and souls at a deep level. If you have this aspect with your partner, you probably notice and enjoy the little things about their personality.

It’s really easy to just feel content in a relationship with the Sun conjunct Venus synastry aspect. Keep in mind that the relationship will especially take on qualities of the sign that this conjunction is in.

Any conjunction can have both positive and difficult qualities. This Sun conjunct Venus synastry aspect is no different. This is a really exquisite union with a lot of beautiful feelings for both parties, but it can also bring up insecurity or identity struggles.

Ultimately, admiration (in some manner, dependent on the sign) is a core part of this relationship. The goal is for both people to maintain their individuality while finding qualities they adore in the other person.

With this Sun trine Venus synastry aspect, there is an easy flow of energy in the relationship. Both people are probably attracted to each other and get along quite well.

The Sun trine Venus synastry aspect means that both individuals admire and value each other’s qualities. They probably don’t have the exact same qualities, but they find complementary values in each other.

This is a good aspect for both platonic and romantic relationships. Although the Sun trine Venus synastry aspect traditionally shows up in charts of romantic partners, this energy can make for a lovely friendship based on shared values, too.

Both people admire each other’s charisma and grace, but they probably also support each other’s dreams and goals. This Sun trine Venus synastry aspect generally means that the relationship is equal and balanced, unless other aspects offset this harmony.

Sometimes, the Sun person can assume the leadership role in the relationship. This will be especially evident in the areas of the sign and house placements, but when this happens, Venus doesn’t feel overshadowed. Instead, these partners exist harmoniously, working in slightly different arenas.

They typically have a lot of common ground concerning hobbies or preferences, yet they aren’t exactly the same. People with the Sun trine Venus synastry aspect simply enjoy similar things. They like being in each other’s company because it’s always harmonious and easy.

However, the Sun trine Venus synastry aspect can actually be too easy. This is such a harmonious aspect that more difficult aspects in the synastry chart may feel worse than they truly are.

If you have this aspect, remember that it’s an extremely easy aspect. It’s okay and is completely normal if others feel much more difficult.

The Sun sextile Venus synastry aspect is another easy aspect, but it may not come as naturally. This aspect means that both partners see value in each other, but they may have to work a bit to truly understand what they each find significant.

With the Sun sextile Venus synastry aspect, there is an opportunity to build mutual admiration. Some of this will be natural as soon as this couple meets because they both have the desire to please each other.

However, they must work to keep things mutual and not descend into power struggles. The Sun sextile Venus synastry aspect can indicate that things may get off balance, if the partners allow it.

This aspect means that both people have similar values and methods of self expression. The work is to focus on discovering new things about the other person and cultivating feelings of adoration that are both given and received.

The Venus person wants to be noticed and cared for while the Sun person might need an ego boost sometimes. With the Sun sextile Venus synastry aspect, work to provide your partner with what they need and you can cultivate a beautiful relationship based on mutual respect.

The Sun opposition Venus synastry aspect is always interesting because it has almost equal positive and negative elements.

In the beginning, the Sun opposition Venus synastry aspect can create a “chase” in some way. Typically, both partners enjoy this, because they see the promise of something alluring at the end of the tunnel.

Alternatively, this can mean that there is an illicit or even scandalous nature to the relationship. I find that there’s generally something very exciting about the way that this relationship starts off; it may even give you a bit of a rush.

The Sun opposition Venus synastry aspect is found in a lot of long-term relationships. It isn’t necessarily bad but, over time, the Venus person can start to feel less-than-appreciated for what they do for the Sun individual.

Meanwhile, the Sun person can get annoyed with the Venus person. The Venus individual might appear stuck on superficial things rather than what the Sun person deems important.

This Sun opposition Venus synastry aspect may create a push-pull feeling. It’s easy to alternate between admiring each other and feeling used by each other.

Sometimes, there are incompatibility in values. The partners may have a different outlook on life altogether. It’s very hard to keep this relationship feeling balanced.

There is almost always a “push-pull” element to the Sun opposition Venus synastry aspect. You may start to feel like whenever you seek your partner out, they withdraw, and vice versa.

If you have the Sun opposition Venus synastry aspect, be careful that you don’t start keeping score of every little thing. Work towards building mutual admiration rather than pitting yourself against your partner.

Related:Venus-Pluto Aspects In The Natal Chart

With this Sun square Venus synastry aspect, there is a lot of mutual admiration at first and plenty of natural attraction. Squares provide a lot of energy, so there may actually be more initial attraction in this relationship than in those with the sextile or trine.

Over time, the Venus person might start to feel unappreciated. It’s very common for them to work hard to please the Sun person, only for the Sun person not to notice.

The Venus person can start playing games, manipulating then appeasing, or acting passive-aggressively towards the Sun individual. These manipulations don’t typically work well, but the Venus person doesn’t know what else to do. This can be a painful relationship for both people.

Over time with the Sun square Venus synastry aspect, the Venus person can come to resent the Sun person, but they never air their grievances. They let their resentment build up inside them.

The Sun square Venus synastry aspect can mean that a lack of care and consideration for each other develops. This can become quite extreme; both partners might become extremely selfish in the relationship.

The partners lose the admiration that a relationship needs. They just don’t see anything to like about each other. The Sun square Venus synastry aspect can make the relationship seem like it holds a lot of potential in the beginning, only to fall short by miles.

Ultimately, this is the relationship where love turns to hate. An obligation may develop to keep the “tallies” equal, with both partners feeling forced to give to the other in order to receive. Sometimes this comes in the manner of money, while other times this refers to affection or time.

The Sun square Venus synastry aspect means that there may be significant differences in tastes or view of love. This aspect can be resolved, but it requires a lot of maturity and commitment on the parts of both partners.