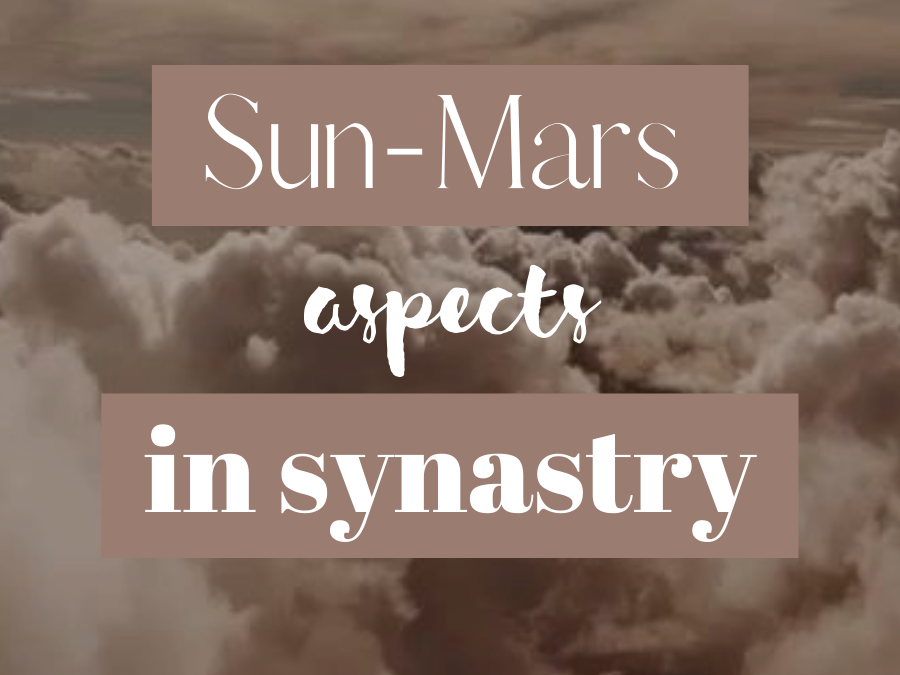 In the synastry chart, aspects are just as important as the actual placements of planets. Aspects show how you relate to your partner and what issues you may encounter in your relationship. Mars-Sun aspects are all about your drive, motivation, and physical attraction.

Mars-Sun aspects will dictate how much you can “feel” each other’s physical presences. It also shows your compatibility in energy levels, time spent together, and sexual preferences.

However, keep in mind that other aspects also contribute to your hobbies and sexual compatibility as a couple. Mars-Sun aspects will definitely give you some insight into your relationship, but take these descriptions with a grain of salt. You have an entire chart that describes your relationships, not just this one aspect.

With the Sun conjunct Mars synastry aspect, there is a strong physical connection. The Mars person specifically feels sexually attracted to the Sun person, but there is definitely physical compatibility in general.

This can be an intense but volatile relationship. It’s a major aspect in the synastry chart that is important to delve into. With the Sun conjunct Mars synastry aspect, both people probably get energy just from being around each other, but too much energy can be a bad thing.

Typically, the energy will build up and result in either explosive arguments or intense sexual relationships.

The Sun conjunct Mars synastry aspect is highly charged. Both people know how to push each other’s buttons, yet they’re also physically attracted to each other.

In the Sun conjunct Mars synastry relationship, it’s easy for either person to get super defensive. Logic is hard to come by.

However, this Sun conjunct Mars synastry aspect can be beneficial, too. Both partners know how to get each other moving. Even being around each other motivates them! This is a lovely aspect if you need to work or accomplish something together.

A lot of how this aspect manifests will depend on the sign that the conjunction is in. For example, the Sun conjunct Mars synastry aspect in Aries will be a lot more angry and explosive than the aspect in Cancer, which will be much more passive-aggressive and emotional.

Usually, there is a level of competition between the partners, but there is a strong attraction even through this competitive energy.

If you have the Sun conjunct Mars synastry aspect, you’re physically compatible with your partner and have similar energetic levels. You probably have similar ways of expressing yourselves sexually, although this is only one aspect of many placements when it comes to physical compatibility.

Ideally, both partners with the Sun conjunct Mars synastry aspect will help their partner work towards their goals and empower them to get moving and face obstacles. At their best, this pair will encourage each other to express themselves.

Work to express this aspect in a motivational or sexual way rather than through anger or aggression. The energy will build up and must come out somewhere, but it’s up to you to decide how this happens.

With the Sun trine Mars synastry aspect, the timing of the relationship is especially fortuitous. Both people have a similar rhythm in life. Neither person wants more than the other can give, and these partners are generally on the same page.

There is probably a healthy competition between the partners with the Sun trine Mars synastry aspect that motivates these folks. They push each other to succeed but also know when to step back and let the other person have breathing room.

Both the Sun and the Mars person respect each other’s individuality. They don’t overstep when their partner is doing something important; they probably aren’t overly needy in these areas.

This Sun trine Mars synastry aspect indicates a mutually supportive, well-balanced relationship. Each partner may be motivated to do slightly different things, but they are able to respect each other’s interests. It just feels natural.

When it comes to hobbies and activities, the Sun trine Mars synastry aspect means that both partners are usually on the same wavelength. If one partner likes to go out to each a few times of week, the other partner probably feels the same. They’re in synch, for the most part.

If this is a romantic relationship, both partners are attracted to each other. The Mars person in particular is sexually attracted to the Sun person. This couple is on the same page when it comes to their sex life, too. They probably have mutual likes/dislikes, or they can easily respect what the other person wants.

This Sun trine Mars synastry aspect usually means that both partners want physical touch and attention a similar amount. They are comfortable expressing their sexual needs to each other without judgment. It’s an easy aspect to have in a relationship.

Ultimately, if you have this Sun trine Mars aspect, you are relaxed and in tune with your partner. You respond to each other’s needs automatically, whether these needs are physical or emotional. You have both affection and passion in the relationship.

With the Sun sextile Mars synastry aspect, there is an opportunity to create an exciting and motivating relationship.

While the Sun sextile Mars synastry aspect means that there is an opportunity to develop a strong sexual spark, this might not happen immediately. The couple will need to communicate and work towards achieving a fulfilling sexual relationship.

There is also the opportunity to develop good timing and balance in the relationship. This Sun sextile Mars synastry aspect has a lot to do with balance.

At first, things might feel a bit off, but with a bit of communication and trial/error, the couple can learn to balance both of their needs. They must figure out what works for them as a couple specifically.

If you have the Sun sextile Mars aspect in synastry with your partner, you probably enjoy many activities together. You can easily find hobbies or things to do that you both appreciate. You may also motivate each other and work well as a team when starting a new business venture.

There may be a bit of friendly competition with this aspect. Be careful that this remains healthy (as it certainly can be) and doesn’t turn too competitive or nasty. With the Sun sextile Mars synastry aspect, you must actively work to encourage each other.

However, you most likely have similar energy levels, making it easier to work together on just about anything.

The Sun opposition Mars synastry aspect is a strong indicator of sexual attraction. In the beginning of the relationship, these people were probably very attracted to each other physically.

Sun opposition Mars synastry denotes conflict and power struggles. Each partner may try to dominate the other or “win” in some way.

The timing in the relationship might feel off. Sometimes, this couple has totally different needs concerning timing. When one person wants space the other person needs attention, then this dynamic swaps.

The Sun opposition Mars synastry aspect means that these partners can have a passionate sexual relationship, but ego clashes can get in the way of this. Both partners often feel defensive, which may kill their attraction to each other.

There can also be sexual difficulties, especially with timing. When one partner wants physical touch, the other doesn’t, and vice-versa. Their views, wants, and needs relating to sex might differ from each other. They probably don’t know how to communicate well in this area.

It’s difficult for this couple to express themselves appropriately. Both partners might feel that they just can’t exactly explain what they desire when they’re fighting or expressing their sexual needs.

There is the potential for a passionate relationship with the Sun opposition Mars synastry aspect, but there is also a lot of competition or challenges. However, this can actually push both partners to grow.

To succeed in this relationship, the couple needs to work hard to find balance and get both of their needs filled. They will also need a lot of communication surrounding their sex life in a way that doesn’t make the other feel defensive. Luckily, all of these differences can be resolved over time with effective communication.

Related:Venus-Pluto Aspects In The Natal Chart

However, over time, both partners can start to feel annoyed by virtually everything about each other. They rub each other wrong and know how to get under each other’s skin. They may find themselves wondering what they saw in the other.

The Sun square Mars synastry aspect has a lot to do with ego. Both partners find their egos getting triggered often; they then react to the other in an impulsive or angry manner.

When arguing, the Sun person might come off as self-righteous or as a bit of a know-it-all. The Mars person will be both defensive and angry. They may initiate the “explosive” parts of the arguments because the Sun person just doesn’t let up.

The Sun square Mars synastry aspect can indicate competition between the couple. This can be healthy if the partners challenge each other, but it can quickly turn aggressive and combative if the levels of competition rise.

The timing in this relationship is always off. One person wants more than the other wants to give. This may be a constant dynamic, or this may switch back and forth between the partners.

They also have different drives or motivators. One person might want to do active things, find new hobbies, go out, etc. while the other is content to stay home. They each feel like they must sacrifice a core part of themselves to stay in the relationship.

If you have this Sun square Mars synastry aspect in your relationship, it can feel like you’re just never on the same page. You always have to explain your actions to your partner because you just don’t understand each other. This can be quite a draining aspect in a long-term relationship.

However, it is possible for this relationship to work. Don’t forget: the Sun square Mars synastry aspect is full of passion. It isn’t a relationship that will die out easily, so there can be enough energy to accomplish just about anything.

Communication is essential in this relationship. You probably react to each other very defensively. You must learn how to express yourselves and your needs without attacking the other person. There is always a way to compromise without either person giving up their values or dreams, but you simply haven’t learned how to do this yet.

Related: Moon Transits: How the Moon Affects You On A Daily Basis