10+ One Word Spells For Instant Results 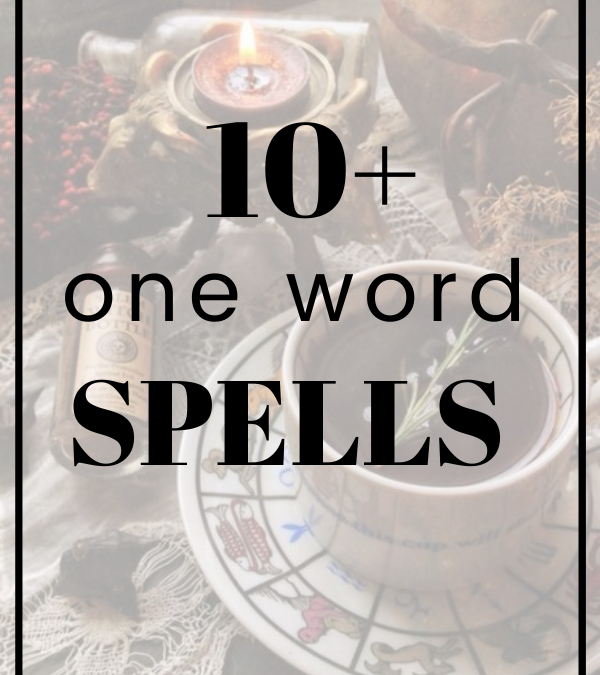 Practicing witchcraft can feel like a lot of work. Most witchcraft spells are long and drawn out, and they require a decent amount of ingredients, time, and power.

As much as I love spending a few hours getting really involved in a spell, there’s something ultra-powerful about a spell that’s simple and quick. If you can focus your energy and direct enough intention during that short period of time, there’s a lot of potential for a fast spell to succeed.

Today I’m compiling a list of my favorite one word spells. These spells are mostly derived from Latin, Gaelic, and Greek, and they have all been tried and tested by myself as well as other witches. They’re great when you’re in a pinch and need to cast a spell quickly without attracting notice!

Now, you could just say the single word and assume that your spell is done, but any of these one word spells will be more powerful if you either raise a bit of energy (between your hands, with a pendulum, in your mind’s eye, etc.) or perform a simple ritual as you say the word.

For example, you could light a candle (I like to use colored tea light candles and choose my color based on the purpose of the spell) and raise energy that way, or burn a bay leaf with your intention written on it. Another easy way to activate these words is through noise, such as a gong or a bell, or by knotting a string as you repeat the word.

Whatever your method is, you need to focus on your intention and desired outcome as if it has already come to pass. If I’m doing a spell for my dog’s safety, I’ll picture him safe and happy in his travels as if this is happening in the current moment, even if he’s sitting right next to me sleeping.

I recommend memorizing at least a few of these words (or writing them down in your phone) to use when you’re in a pinch!

When you perform these spells, at the very least, raise a bit of energy between your palms and say the word 3 times, either in your mind or out loud, while you picture your desired outcome. These are all super simple spells that can be done around others without them even noticing!

This is a simple one word spell used to verbally cast a circle. Cast the circle with your hand (by moving it in a circular motion) and/or using visualization to enhance the effects.

This is one of my favorite one word spells because it’s used to attract new friends. It’s a great spell to have up your sleeve when you’re in a new situation surrounded by strangers.

This spell is used to strike up a conversation or to continue a conversation. It’s definitely a fire spell; the translation means that you’re literally asking for the conversation to catch fire. This would be extra effective if used with candle magic.

This is one of my favorite healing one word spells. It’s used to send positive energy to someone (you’re asking for the positive energy to flow to them), so you can send whatever kind of energy you’d like, whether it’s spiritual, mental, emotional, or physical. It helps to have a tool to direct the energy, although you can use your hands or finger as well.

If you need protection around your home, use this spell for instant results. This is also a great defense spell against hexes and jinxes.

Musufugax is best used to counteract negativity, bad luck, or send ill intentions back to the sender.

If you need to be invisible, use this one word spell. If done correctly, your aura will fuzz and you will fade into the background so that you aren’t noticeable. Try to visualize fuzzing your aura as your chant this spell.

If you’re running late and need faster transport, try this one word spell. It’s especially effective (in my experience) when you’re on the subway, but it’s even great when you’re driving. It will essentially ask the universe to clear the path so that you get through every traffic light or stop as quickly as possible.

This is a great spell for quick, clear weather, especially in a pinch.

This spell is used to calm down someone who is upset (sad, angry, etc.). It’s a sea spell, so it works best when you cast it using water in some manner.

This is another one of the best healing one word spells. It promotes instant good health in yourself or others, depending on how you direct your intentions.

This one leaf spell is meant for bay leaf magic. Write your wish on a bay leaf and hold it in your hand as you say this spell, then burn the leaf and meditate on your intention.

Need to get more of the basics for your practice? Check out this awesome witchcraft starter kit on Etsy!