Divination has become more and more popular in the last few years. Even though Tarot cards have been around for centuries, card decks are much more common and even acceptable in society today. The most common question I get is about Tarot vs Oracle cards and the distinction between the decks. So, what is the difference?

If you haven’t used either deck before, then you’ll be surprised to find that they’re completely different. The question of Tarot vs Oracle doesn’t have a simple answer.

If you’re new to card reading, you’ll probably want to try out each deck at some point. You’ll need to learn more about each deck before you can decide what works well for you!

Structure Of The Deck

The Tarot deck and the Oracle deck have completely different structures. This is the main distinction between the two types of decks.

The Tarot deck is quite structured and always has the same set of cards, although the illustrations may change from deck to deck.

Every Tarot deck will have 78 cards. The Major Arcana are the “bigger” cards when you’re looking at life events; there are 22 Major Arcana cards. Typically, these cards are represented by Roman Numerals.

The Major Arcana cards tell a story, beginning with The Fool and ending with The World. They are typically referenced by their names, not their Roman Numerals.

Each suit has numbers (like a regular card deck) as well as Page, Knight, Queen, and King cards.

Every single card in the Tarot deck (Major or Minor Arcana) has a specific meaning. During a reading, the cards might be right side up or reversed; the right side up meaning is the “regular” definition of the card, while the reversed card is the opposite or inverse definition.

There are many ways to do a Tarot card reading. Although the Tarot deck is used for almost all types of questions, it’s generally best for “larger” life questions, or a reading where you need to see some sort of storyline.

In addition to the structure of the deck, there are many more Tarot spreads available (both online and in books) that have been perfected over centuries. The most common Tarot spread is the Celtic cross, but it’s a pretty complicated spread for beginners, so I recommend starting with a smaller 3-card spread if you’re new to Tarot.

Although there are certain Tarot decks that are extremely popular and well-known, the illustrations vary widely from deck to deck. The meanings will always be almost the same, but this is where your psychism will come in, because you can gather inspiration from the illustrations as well as the traditional interpretation of the cards.

For example, I have the classic Rider-Waite deck, but I also have a Fairy deck (in blue and silver colors) and a Halloween deck (which is mostly black coloring and is super witchy).

We are currently selling a super cool black and white astrology Tarot deck in our store. It will be available for limited time: check it out here! 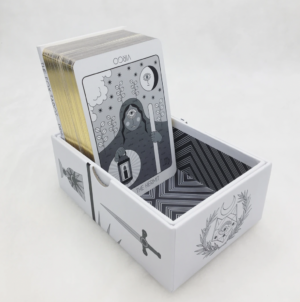 In complete contrast to the Tarot deck, Oracle cards have virtually no structure. This is one of the many reasons Oracle cards have gained so much popularity in the last few years. Oracle cards are perfect for beginners who don’t want to memorize a whole list of descriptions.

Oracle cards can be created in any way the artist would like. There are so many different kinds of Oracle decks out there, from Angel decks to Dark Witch decks.

I find that Oracle decks are especially useful for readings where you have a specific question that you need an answer to.

I also find that Oracle cards are better to use when you want to practice using your intuition in conjunction with a reading. While intuition is of course used during Tarot card readings, Tarot cards can also give concrete answers without even involving intuition, while it’s almost always necessary to discern more than what the Oracle cards give you.

If you want to work on your intuitive abilities, both decks are useful, but the Oracle certainly gives more opportunities to practice psychism.

Check out our astrology oracle cards that we recently began stocking. They’re made in the USA and answer lots of astrology-related questions. 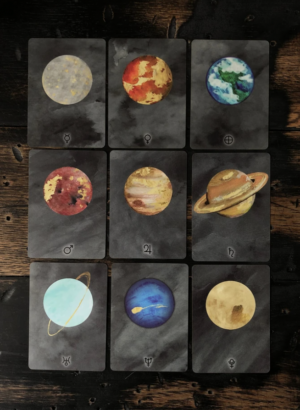 Tarot vs Oracle: Which Is Better?

There really is no clear answer to the question of Tarot vs Oracle cards. Each deck serves its own unique purpose!

Some people are drawn towards one and find that they’re just better at using a specific deck. I personally use both, but when in doubt, I find that Tarot gives me more specific answers. Sometimes, however, I’m drawn to Oracle cards for a specific purpose, and I get a way better reading when I follow my gut.

I recommend that you pick up an inexpensive deck of each type and practice so you can figure out your own answer to the Tarot vs Oracle conundrum. Scroll down and check out my recommendation for affordable beginner decks.

When we’re talking about Tarot vs Oracle, the question of which is easier isn’t a simple one to answer.

Oracle cards are more loosely defined. There aren’t pre-written explanations for every deck online, so you need to interpret them as you go using your intuition. Depending on your skills, this might be easier or harder.

How To Choose A Deck

Whatever you decide on the question of Tarot vs Oracle, choosing a deck of either type is a really personal venture.

When working with Tarot cards, I almost always recommend that you start with the Rider-Waite deck. It’s the most simple, common Tarot deck that matches all of the descriptions for each card out there.

There are a few different variations of the Rider-Waite deck. Here are my 5 favorite beginner Tarot decks to use. Or, click here to shop for unique Tarot cards for sale in our newly launched store.

When you’re choosing Oracle cards, there’s much less structure. Here are my 10 favorite beginner Oracle card decks, however you can really start with any deck that you’d like since they’re so different. Go with your gut!

Tonight's first Full Moon 🌕 of the year is in t

The first Full Moon of the year falls in the sensi

Daily reminder to raise your frequency through the

Your energy is very valuable! It's your innate pow

"A good tarot reader learns the meanings of cards.