Venus In Aquarius In The Birth Chart: Everything You Need To Know 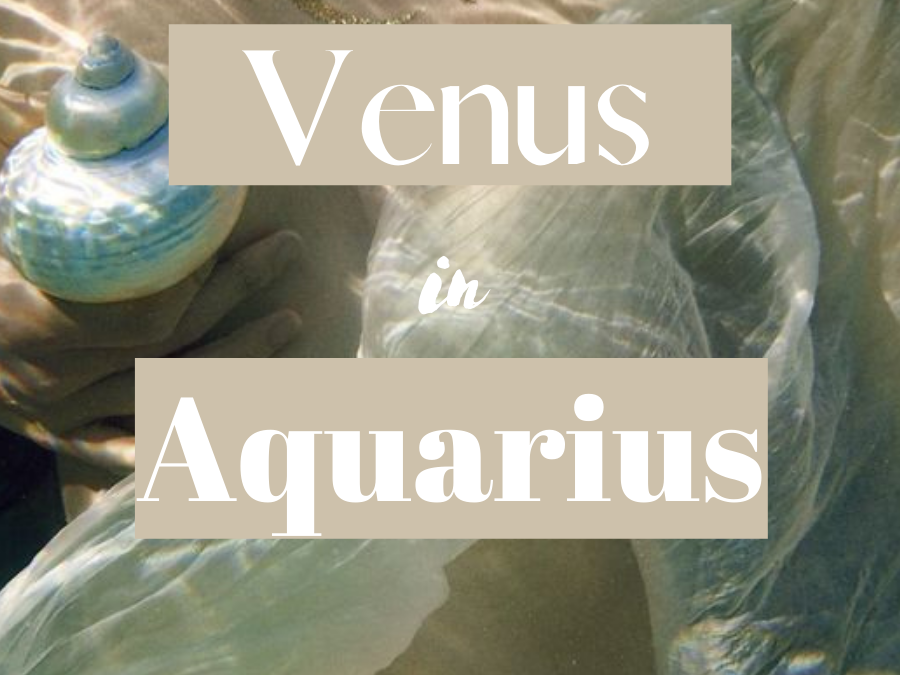 Venus is the sign of beauty, money, pleasure, attraction, and style, so Venus in Aquarius can feel like a bit of an anomaly. Aquarius is an eccentric yet scientific sign, whereas Venus is romance and poetry. How can these two fit together?

In general, I find that this placement is neat yet unique. It’s an odd combination that works really well. Some of my favorite artists and celebrities have this placement, probably because it always causes the individual to stand out in some way.

The Venus in Aquarius symbol will look like this in your birth chart. You’ll want to note what house the placement is in, since the house will affect how Venus is expressed in your personality. Once you’ve found your Venus sign, read on and see if these qualities fit you!

Venus rules many different areas, but some of these areas will show up for you more than than others. This is because your individual Venus placement is unique and has its own aspects and house. Here are the general areas that Venus in Aquarius influence.

With Venus in Aquarius, you do value money, but tend to see it as a means to an end. For you, the value of money is the experiences that it makes possible or the things you can do with it.

Unless you have other planets that point to these traits, you don’t want to have money just for the sake of being rich.

When it comes to style, you’re probably very clean. Sometimes, those with Venus in Aquarius dress extremely plain and simple, preferring function and quality over everything else, while other Venus in Aquarius individuals will dress flashy, edgy, and different.

Regardless of which style is yours, you will always make sure that your clothes are clean and neat.

Some great examples of celebrities with Venus in Aquarius are Ellen DeGeneres, Harry Styles, Kate Middleton, and Taylor Swift. While their actual styles of dress vary, they’re all extremely particular and are always immaculately dressed.

When you meet someone with Venus in Aquarius, they might look totally normal and appear simple in style, but there is always a feeling that something is different about the person. These folks carry a unique energy that makes them stand out.

You don’t like following the “rules” of society with Venus in Aquarius; you take pleasure in doing things differently or making an existing process better. You’re proud to follow a unique path.

Sometimes, with Venus in Aquarius, you might enjoy “crusader mode,” especially when you’re fighting for a cause. This doesn’t necessarily mean that you’re involved with charities or philanthropy (although it could). You might just as easily care about children, animals, plants, or quite literally anything else. Often, this crusader mode is a natural instinct and isn’t necessarily something that involves your job or hobbies directly.

You take pleasure in thinking up new, creative or futuristic ideas. Creativity is surprisingly prominent in this placement, even though Aquarius is known as a science sign.

If you have Venus in Aquarius, you value honesty and loyalty. Aquarians are known for being off-beat, but they are a fixed sign so they definitely aren’t fickle. You want friends you can count on.

You also might be friends with an eclectic mix of people; the look of the group doesn’t matter much to you as long as the friendships are genuine and provide mental stimulation.

Intellect is very important to these folks. They value challenging conversations and might be drawn towards unusual friends. To a Venus in Aquarius, different is refreshing.

If you have Venus in Aquarius, you attract others through the mind. In some specific ways you’re progressive, open, and radical, and people who want that variety are drawn to you.

In social situations (especially romantic), you might be a bit aloof. This attracts those whose enjoy the chase, although this aloofness can later be difficult when you’re actually in a relationship and your partner wants more emotional intimacy.

Generally, you attract both partners and platonic friends by simply being interesting. You’re always a step ahead of others with your mental processes.

You might enjoy relationships with different rules and will need to figure out how to communicate this to your partner. Most of the time, with Venus in Aquarius, you need to feel that you’re friends with your partner as well as lovers. Companionship and intellectual compatibility are extremely important to you.

You want to be loved for your intellect and your visions above all. With a partner or even prospective partner, you need a strong mental connection. You don’t like to feel bored and will quickly leave if a relationship turns stale.

Sometimes, I find that those with Venus in Aquarius feel an attraction to partners who don’t reciprocate. They might enjoy the detachment of the other person. This is by no means a rule, but it is something that tends to happen with the placement, especially during the early stages of a relationship.

Alternatively, if a partner becomes too emotional or clingy, this individual will usually withdraw; they get claustrophobic in relationships easily. Neediness is this kiss of death for these folks.

It’s important for you to feel that your relationship is heading somewhere. You don’t like boredom or monotony. With a deeply intellectual partner, this is less likely to occur.

With any placement, there are positive qualities as well as difficult traits. No one individual will have all of these attributes because each Venus placement is unique depending on the house and aspects. These are qualities that these folks can have, but you’ll have to look to the individual to see what fits.

Venus In Aquarius: Man Versus Woman

It’s up to you to choose with energy you identify with more. If you’re unsure, I recommend reading the description of each energy for Venus in Aquarius (below) and choosing what resonates with you.

Generally, in a woman (or someone with feminine energy), Venus will show how the person acts and what vibes they gives off towards others. When this person is flirting, they will assume many of the qualities of Venus in Aquarius. These Aquarian qualities will show up directly in the personality.

In a man (or someone with masculine energy), Venus will show what kind of qualities they are attracted to. How this person will act depends on their Mars sign, but their Venus sign dictates what types of energy they are drawn towards in a partner.

As we evolve and change and the gender lines blur, these distinctions become less absolute. For example, I find that most women will show a lot of the qualities of their Venus when they’re flirting, but a few of their Mars qualities will bleed through also.

It’s important to learn about both Venus and Mars. Each person has a unique combination of both qualities, although this combination may be swayed slightly depending on the person’s gender.

The typical Venus in Aquarius man is attracted to partners who are a little different. Most people picture the stereotypical Aquarius hippie, but his attraction can lean towards people who are different in any specific area, especially depending on the house his Venus falls in.

For example, I personally know Venus in Aquarius men who are attracted to partners who parent their children differently, work in a job that’s a little divergent from what society expects, dress eccentrically, are into vintage music, etc. His ideal partner will be unique in a specific way that’s not the same for every Venus in Aquarius man. These differences might not even be obvious to others, but to him this is what sparks attraction.

The regular Venus in Aquarius man tends to be relaxed and to go with the flow in social situations. He doesn’t like to be bored and needs a partner who is up for talking about intellectual topics and big ideas. Dullness and routine will kill any attraction immediately for the Venus in Aquarius man.

The Venus in Aquarius man probably won’t mind if his partner is a bit erratic mentally. She might be messy, might start new projects constantly, or come up with new, exciting ideas. It probably doesn’t bother him to come home to his house redecorated or to a spouse who suddenly switches careers.

When he’s first getting to know a new partner, coldness can actually be a turn-on for the Venus in Aquarius man. He doesn’t mind if his partner is a bit aloof, as long as they’re willing to discuss big ideas when they do spend time together. He can sometimes like the chase.

Physically, the Venus in Aquarius man is just as different. He doesn’t typically go for the most attractive girl in the room, especially when choosing a long-term partner. These men are often attracted to someone considered plain by conventional standards because they see more than just beauty: the mind is most important to these folks.

The Venus in Aquarius woman is a free spirit who is strong-willed. In the areas where her Venus shines, she always follows her own path. For example, she might eat vegan, choose to school her kids differently, or work in a career that makes her a bit of an outcast. Sometimes, these differences are more subtle; for example, I know a Venus in Aquarius woman who is obsessed with collecting vintage items and only wears vintage clothing. Whatever this woman does, she does it without hesitation.

Her ideal partner is social and outgoing in groups. She also wants someone flexible who is up for anything, no matter how radical it may seem. Regardless of the stereotype of Aquarius (which is often free love), she does want someone trustworthy and loyal.

In a relationship, she can be a bit cold at times. She might not show a ton of affection, but that doesn’t mean that she doesn’t feel love; the Venus in Aquarius woman just has a hard time showing it.

This woman can even be kind of cool or cold in bed. The idea of sex is usually more exciting than the actual act, and by the time she gets down to it, she might not be interested anymore. She can have a tough time letting loose in the romance and sex department.

Even though the Venus in Aquarius woman is “different” or unusual, I find that these women have pretty traditional relationships. They typically don’t mind being committed as long as they have their independence. They enjoy relationships where each partner has their own hobbies, talents, or work, and doesn’t need to be together 24/7. They simply need emotional space from time to time.

The Venus in Aquarius woman is good at being friends with the opposite sex and keeping it strictly platonic. These women often have a lot of guy friends (especially earlier on in life) who they just see as friends. There is a clear line for them between friendship and romance, although they need both in a relationship.

How To Master The Venus In Aquarius Energy

The key for someone with Venus in Aquarius is to celebrate their differences and be themselves without apology, yet to also remember that other people have feelings. It’s easy for a Venus in Aquarius person to get so caught up in their own unique experiences that they forget to treat others nicely.

The natural defense mechanism for these folks is to turn away or grow cold, but they have a huge amount of warmth underneath, they just need to remember to access it and to treat others how they want to be treated.

Famous People With Venus In Aquarius:

Here are some of the most well-known celebrities with this placement.