All About About Mars In Taurus In The Natal Chart 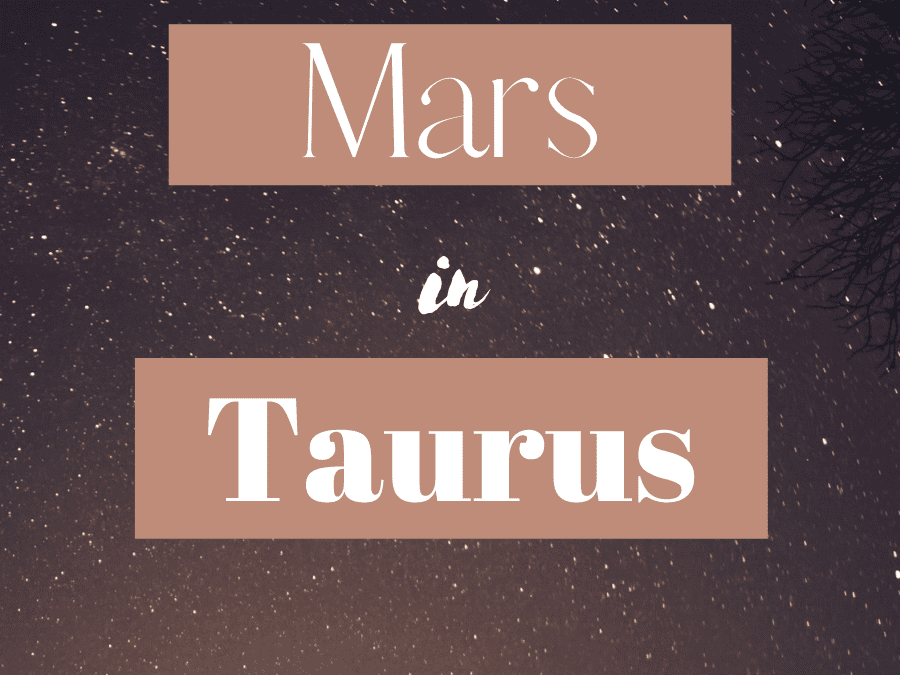 Mars is one of the best personal planets to learn about in astrology because it shows up so often in our personal lives. The planet of Mars rules our drive, temper, romantic attraction, sex life, and more.

In Taurus, Mars is in detriment due to Taurus’ slow and steady nature. While this seems like a negative, there are ways that Taurus balances out Mars to create quite a bit of harmony.

In any placement, there are positive and negative qualities that show up. In this post, I’ll be going over the characteristics of Mars in Taurus (natal) as well as the differences in masculine and feminine energy.

Have a different Mars/Venus sign? Check out related posts here:

Mars usually covers Arian aspects of the personality such as your drive to get things done, your temper and how you get angry, your career (where your drive and motivation is concerned), and your romantic/sex life, including the attraction phase. Here are the ways in which I find Mars in Taurus natal to manifest.

When someone with Mars in Taurus wants to do something, they’ll work until it’s done. These natives are great at finishing tasks as long as they have sufficient motivation.

If they don’t want to do it (but are being told to or need to for some other reason), it can be impossible to get them to try. These natives are pretty lazy when they don’t feel like completing a task, but they have an enormous drive when they need to.

This can be a tricky placement for the parents since it’s impossible to get their child to obey when he/she doesn’t want to.

Often, those with Mars in Taurus have a specific drive to create some type of security for themselves (money, home, love, etc.) and won’t stop until they get it, even if it takes years.

Those with Mars in Taurus natal aren’t super adaptable once they’ve made up their mind. Taurus is a fixed sign, so these individuals won’t be easily convinced. They’re not quick to anger, but they simply won’t alter their plans for anyone.

They typically have a strong temper only when they’ve been provoked for a prolonged period. Once this temper is let loose, these folks can hold a grudge for a while, especially if they feel they’ve been pushed too far. They don’t fly off the handle, but they can be extremely grumpy if they feel pressured.

The temper of a Mars in Taurus individual usually shows itself as a wall of resistance that’s impossible to get through, not blunt anger.

People with Mars in Taurus are good workers when they want to be. They don’t give up easily; failure doesn’t get them down and they’ll keep pushing until they reach their goals. They’re not afraid to work for what they want.

I sometimes find that these people end up working for others in pretty basic jobs (such as a mailman, baker, etc.) that have a strict routine, but this isn’t always the case. I also know some individuals with Mars in Taurus who work in the FBI, own their own businesses, etc.

There isn’t any one career that is best for a Mars in Taurus natal. It will depend completely on the individual, but they’ll know when they’ve found the right one. A Mars in Taurus individual has the potential to bounce from career to career until they find the one that sticks. Once they discover it, they’re bound to stick with it forever and become very good at what they do.

The big theme for Mars in Taurus in terms of career is that they don’t give up easily. These people are stubborn and willing to do whatever it takes to achieve their goals, even if the dream feels impossible. It’s difficult to discourage them, so they usually end up being successful in whatever they choose.

Like any other Taurus placement, a Mars in Taurus individual is attracted to creature comforts. A well-decorated home, expensive but tasteful clothing, and gourmet food are all things any Mars in Taurus will appreciate.

Mars is a masculine planet, so it determines how masculine energies show themselves and what qualities feminine energy are attracted to. Because this is such a big topic and since Mars is so important when it comes to attraction, I’ll cover this more in a few paragraphs.

Those with Mars in Taurus aren’t super intellectual when it comes to romance and sex. They tend to thrive off their physical and emotional senses and they live completely in the moment.

When it comes to love, people with Mars in Taurus natal tend to show love through physical expressions (touch) as well as actions.

They don’t often abstain from sex, at least in most placements. Some are slow to arousal while others are faster, but most people with Mars in Taurus enjoy seduction or foreplay of some type. Sex is typically a physical and emotional experience. They like to involve all of the senses and find a partner who will meet them on that level.

Because Mars in Taurus depends so much on the house and aspects to it, don’t expect to have every single one of these qualities. You will need to look at your own chart and see what fits based on the house and interactions to your Mars sign.

Mars In Taurus: Male Vs. Female

It’s up to you to choose with energy you identify with more. If you’re unsure, I recommend reading the description of each energy for Mars in Taurus (below) and choosing what resonates with you.

Generally, in a man (or someone with masculine energy), Mars will show how the person acts and what vibes they gives off towards others. When this person is flirting, they will assume many of the qualities of Mars in Taurus.

The Mars In Taurus Male

A typical Mars in Taurus male is conventional and conservative. That doesn’t necessarily mean that his political views are conservative (as Mars doesn’t rule that), but he does tend to act more like an old-fashioned, traditional guy, whether or not he intends to.

He likes to be in charge of things to make sure everything is okay. He is pretty sensitive, but it can be hidden deep down.

He has a healthy respect for physical beauty, like any Taurus. When he’s in the flirting stage, he’s the type to dress up, take his date to a nice dinner in a fancy car, etc. He isn’t above a bit of romance, but he can also be pretty closed off from a partner. A man with Mars in Taurus definitely won’t fake love if he doesn’t feel it and it may take a bit for him to get there.

At his best, this guy is classy and shows affection through physicality and actions. At his worst, he’s cold and uptight. He can easily ignore his partner for a long time if he’s angry.

I find that a Mars in Taurus man usually feels a strong connection to his past and where he’s from, whether this means his family and ancestry or where he grew up.

He isn’t the loudest guy in the room by any means (unless he has a lot of Leo or Gemini) but he definitely has a physical presence that others notice before he even speaks. It’s usually this energy that attracts partners to him.

In bed, a Mars in Taurus male can be extremely sensual and giving if he’s really in love. If not, he can be cold, emotionally detached, and strictly physical.

The Mars In Taurus Female

When a female has Mars in Taurus in her chart, she usually prefers a traditional man who will care for her in some way, whether this means emotionally, physically, or financially.

She often finds herself attracted to a “classic man” who has good looks, great taste, and a solid position in life. I picture this guy to be your typical roaring ’20s man. She will expect him to be loyal and dependable, but also needs someone she’s physically attracted to.

She cares a lot about her looks and might spend a good chunk of change or time on clothing, cosmetics, etc.

In bed, she is sensual and wants to please her partner, but she also likes to enjoy herself. Similar to the masculine energy with Mars in Taurus, the feminine energy enjoys a good bit of physicality and likes to employ all of the senses.

How To Master The Mars In Taurus Energy

These are so many lovely qualities about Mars in Taurus individuals. To really master this energy, try to take all of the positive qualities with you and work on becoming less stubborn.

With Mars in Taurus, you need to practice putting yourself in other people’s shoes. It can be hard to see outside your own perspective, but this is the only way to evolve.

At its best, Mars in Taurus is extremely spiritual, but because it’s a fixed, earthly sign, it’s easy to forget about the spiritual self. Don’t loose sight of the bigger picture or get bogged down in physical, day-to-day matters. Spiritual progress is important to growth with a Mars in Taurus placement and utilizing all of the senses in spiritual work can be very powerful.

Famous People With Mars In Taurus

Questions or comments about Mars in Taurus? Drop a line in the comments and we’ll be sure to answer!