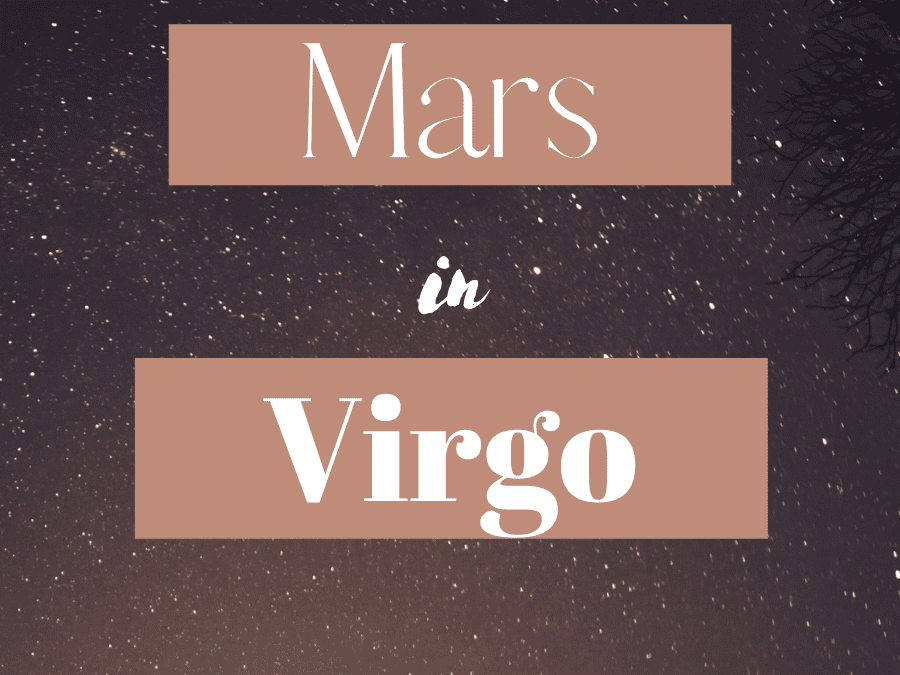 Mars is the planet of action; it rules our drive, our motivation, our methods of accomplishing tasks, and our attraction to others.

Virgo is the sign of doing things efficiently, so it helps Mars complete tasks that would otherwise fall to the wayside. Mars is a very erratic, aggressive planet, but I find that Virgo helps to temper this energy without removing the motivational aspect of Mars.

Having Mars in Virgo in your chart is (in my opinion) really lovely! There are some great qualities that come from the energy of this placement and there is a clear path to overcome the difficult characteristics.

Mars rules a person’s drive/motivation, temper and anger, career (especially having to do with motivation to work), and attraction to others (both mentally and physically).

Individuals with Mars in Virgo are usually really productive. They’re great at noticing small details and will fine-tune things until they get them right. They have a lot of drive and motivation to finish a task, but they might spend quite a bit of time until it’s just the way they want it.

People with Mars in Virgo are really good at juggling multiple projects. While it might take them a bit to finish everything, they almost always do a job well.

They need to have a project to work on at all times; idleness doesn’t mesh well with these folks and can cause anxiety or depression. These busy minds need constant tasks! People with Mars in Virgo actually get energy from being busy, as long as they’re doing something they’re interested in.

These people are sharp thinkers and can solve any complex problem with enough time. It’s best not to rush them; they work at their own pace, but always have enough drive to finish a project that’s important to them.

Folks with Mars in Virgo do have a temper, but they don’t always show it. They have strict standards of quality and can get angry or critical towards other people who may be more lax. This can cause issues in the workplace, in the home, or in any environment where they need to work with others.

They’re not consistently angry people. They will either let the anger build up and release it all at once in an outburst or let it out slowly through small, critical remarks throughout the day. Sometimes, they do both. They’re very difficult people when annoyed, but it usually doesn’t last that long.

Those with Mars in Virgo are perfectionistic (especially in the house where Mars falls), so their main source of anger usually comes from things not being up to their standards. They aren’t good at sparing others’ feelings when they do become irritable; you don’t want to be on the bad side of a Mars in Virgo individual!

People with Mars in Virgo can do well in almost any career as long as they have some control over the process. They’re pretty particular about how things are done and they expect nothing less from other people.

These folks are known for being in healthcare (since Virgo is the sign of health), but I personally know people with this placement who excel in detective work, those who are entrepreneurs, individuals high up in the corporate world, etc.

These people don’t need a lot of praise from superiors because they just know when they completed a task efficiently. Unless there are conflicting signs and aspects in the chart, they usually have a clearly defined path to success in their mind’s eye. They’re very clever, enjoy solving intricate problems, and are good at getting things done.

People with Mars in Virgo are usually either verbal or witty when flirting. These are people who notice the small details and hints quickly become declarations of love.

They’re often attracted to people who seem simple and normal; they’re able to see something special in these individuals that draws them.

Because attraction is gender-specific, I’ll talk more about it a few paragraphs down; you’ll find that the way Mars in Virgo manifests (concerning attraction) is different depending on if the person identifies as masculine or feminine.

Those with Mars in Virgo are known for being attentive partners; they pick up on the small details about their love and show them they care by simply noticing. When Mars in Virgo is in control, they make their partner feel extremely important.

These individuals aren’t all into casual sex, but many of them don’t see an issue with “practicing” and honing their sexual skills before they meet a long-term partner. Just as they strive to be great at work, they also want to be good in bed. They generally need a bit of practical experience to reassure them that they’re competent before they can let go themselves and enjoy the experience.

Pleasing their partner is extremely important to people with Mars in Virgo. Sex is imperative to them; they usually pay very close attention to their partners and try to learn what they like.

Virgo is often thought of as a “virginal” sign, but this definitely isn’t the case with Mars in Virgo people. They aren’t afraid of experimenting, but are instead fearful of being “bad in bed” or failing to please their partner. They aren’t selfish lovers by any means.

Mars In Virgo: Male vs. Female

It’s up to you to choose with energy you identify with more. If you’re unsure, I recommend reading the description of each energy for Mars in Virgo (below) and choosing what resonates with you.

Generally, in a man (or someone with masculine energy), Mars will show how the person acts and what vibes they gives off towards others. When this person is flirting, they will assume many of the qualities of Mars in Virgo.

The typical Mars in Virgo male likes to take care of small, practical matters for his partner to show appreciation. He would be the guy to make you coffee in the morning, start your car in the winter, or bring home that special meal he knows you like.

You’ll know a Mars in Virgo man likes you if he starts doing things to make your life easier, no matter how small they are. Another easy clue is if he takes great pains to notice the small details about your life and about your personality.

For example, he will remember what his partner wears, what their favorite color is, and pick up on small idiosyncrasies that make his partner special to him.

The Mars in Virgo man subconsciously wants to be helpful to tie him to his partner, even if that’s not what he thinks he’s doing consciously.

In bed, the Mars in Virgo man is also extremely helpful and is quick to notice the small things that his partner likes. He’s a super attentive lover and can be really selfless and giving. He is turned on by making his partner enjoy themselves, so partners of Mars in Virgo men are usually very satisfied.

A Mars in Virgo female (or anyone who identifies with feminine energy) is attracted to men who pick up on details about her and care about the little things that happen in her life.

She probably won’t go for the guy with the loudest energy in the room but will feel drawn to the man who notices what she’s wearing, remembers to get her the drink she likes, etc. Her Mars isn’t focused on looks (although her other signs may be – check the chart) but cares more about the actions of a potential partner.

Intelligence and knowledge is also attractive to her, even if it’s not in the traditional educational sense. She is drawn towards partners who are good at what they do and who don’t cut corners.

It’s also important to the Mars in Virgo woman to find someone who satisfies her in bed and who prioritizes her sexual needs. She wants a guy who will make sure she has a good time during sex because it makes him happy as well as her.

How To Master The Mars In Virgo Energy

Mars in Virgo individuals have so many great qualities! The key to evolve is to let go of judgments and work on becoming less critical.

Mars in Virgo people need to learn to embrace the energy of another person, not just the results the person gets. See the big picture and appreciate someone for who they are as a whole and not just the small details about them.

They should also work on being less critical of themselves and celebrating what they can accomplish as well as honoring their own soul and their purpose.

Famous People With Mars In Virgo

For whatever reason, a ton of famous people have Mars in Virgo. I included the most well-known celebrities here!

Questions or comments about Mars in Virgo? Drop a line in the comments and we’ll respond ASAP!